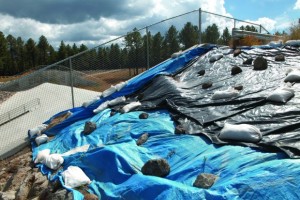 The dam at the Clay Avenue Detention Basin in west Flagstaff has shown cracks that are the subject of a $670,000 investigation by the Army Corps of Engineers. (Jake Bacon/Arizona Daily Sun)

A crack in a dam on the western edge of Flagstaff has halted progress on a flood control project deemed vital to the redevelopment of much of the Southside neighborhood.

The crack, which showed up 15 months ago, has already cost nearly three-quarters of a million dollars to investigate.

Repairs could cost at least a half-million dollars more.

Meanwhile, much of the rest of the Rio de Flag flood control project sits stalled in its design phase as vital federal funds for construction are issued to other cities.

Flagstaff officials are concerned that while the city had little to do with the construction of the Clay Avenue Detention Basin, the money used by the Army Corps of Engineers to probe the defects is coming out of a city-designated account designed for Rio de Flag construction.

“The city has significant concerns related to the continued accrual costs with the research and repair of the damaged levee at the Clay Avenue Wash Detention Basin,” wrote Flagstaff City Manager Kevin Burke in a letter to the Corps. “The city had no oversight with respect to the cost of the research, design and repair of levee and should not be obligated for any costs associated with remediation to correct deficiencies.”

With the limited federal monies issued to the city project used to pay for the investigation, the next phase of the Rio de Flag project along Butler Avenue is on hold until federal officials issue more funding. And until the entire project is finished, owners of properties in the Rio de Flag flood zone south of Route 66 will continue to face higher financing and construction costs along with strict building limitations.

The cracks along the main retaining wall on the detention basin showed up 15 months ago, soon after a California contractor finished the $6.5 million project.

The 71-acre basin is designed to hold 96 million gallons of floodwater and isn’t vital to public safety in most scenarios.

The city has been notified that the U.S. Army Corps of Engineers has spent $670,000 for a “forensic investigation to determine extent and causes of embankment deficiencies.”

For now, those unexpected expenses were paid out of a Corps-controlled account set aside for the next phase of the flood control project.

An initial estimate offered by the Corps last year suggested the investigation alone was going to cost roughly $1 million. The construction of the entire flood control project could cost between $69 million and $81 million.

A preliminary recommendation from the same federal agency on how to completely repair the retaining wall pegs the cost at up to $539,000 if an environmental assessment is required.

Currently, the city has no timeline on when it will be repaired.

The Flagstaff-based flood control project received no money in the last fiscal cycle, and hopes among city officials are fading that Congress will authorize any funding in the current cycle unless a cost-benefit study has been completed.

Burke praises the quick action by the Corps to investigate the cracks in the retaining wall immediately after their discovery, even though it meant the cost of the investigation came out of an account set aside for Rio de Flag flood control capital projects.

He said the use of those funds has delayed the next phase of the project, an extension of the channel near Butler Avenue.

The city manager said he has been told by Corps officials that the general contractor that built the entire basin will make repairs, but has not agreed to pay for the investigation.

He was told by Corps officials that legal action against the Los Angeles-based general contractor might be necessary to recover the funds.

Daniel Calderon, a spokesperson with the Army Corps, said he couldn’t comment on whether the Corps would seek to reimburse the funds through legal action against the contractor, saying the investigation is still ongoing and is under review by their legal department.

A supplemental report, issued by the Army Corps and obtained by the Arizona Daily Sun, identified embankment cracking, settlement of portions of the structures, as well as a missing sand filter in the upper portion of the embankment.

Alpine Diversified, the Los Angeles-based general contractor that built the basin, did not respond to requests by the Daily Sun for comment.

The company lists numerous contracts with the Army Corps on its website, including the $5.1 million contract to build the basin for the Rio de Flag flood control project.

The dam, in its current condition, is not considered to be an imminent threat to the safety of residents downstream or adjacent to it, even during a 100-year storm.

The structure is designed to withstand a once-in-a-century type of storm when the community reaches full build-out in 2053.

The Army Corps of Engineers modeled floodwaters created from dozens of square miles of impervious surfaces expected to be built in future developments on both sides of the city in the next 40 years. With virtually no development west of the basin yet, city engineers believe that a significant portion of heavy rains will be absorbed into the ground rather than run off and pool next to the damaged basin.

“Although it is theoretically possible that the embankment could fail … the probability is considered so remote as to render that scenario overly and unrealistically extreme,” the Corps concluded.