A NEW CHANNEL IS BORN

In the early 1900s, the Rio was rerouted through the low-income ethnic Southside Neighborhood of Flagstaff to prevent flooding in the new P.J. Brannen’s upper-middle-class subdivision, a subdivision that was approved in 1894.

A 2,800-foot shallow and narrow trench was built southeast from Cottage Ave to the head of a small existing tributary near O’Leary and Ashurst St. The new channel was said to have intensified residential flooding 1896-1938 in Downtown, Southside, and even still today as the channel remains very narrow.* 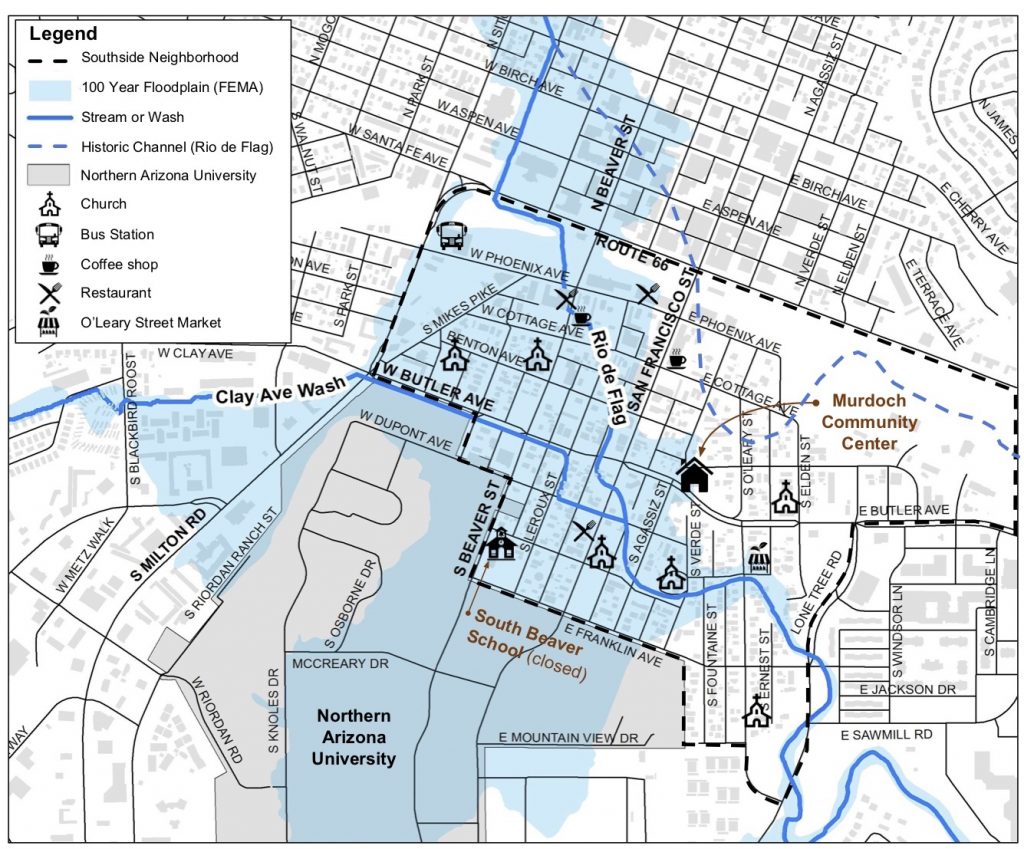 Figure 1. The Rio de Flag where it was rerouted and now flows through the Southside Neighborhood.

The Southside Neighborhood is a historic area home to many underprivileged minority peoples, a great number of whom came to Flagstaff to seek employment during the booming lumber industry in the early 1900s and to flee racial persecution from a Jim Crow South. The Southside has faced the dangers of flooding since the late 1800s and remains in a Federal Emergency Management Agency (FEMA) designated floodplain today (Fig. 1).

“The flood zone makes it more expensive to purchase home insurance, to make repairs, and to build affordable housing— but once the river is re-channeled to protect against floods, the land and housing in Southside will increase in value, and possibly lead to gentrification and removal of longtime residents who have doggedly held onto homes built by their parents and grandparents, but which are now in need of repair and renovation.” – Ricardo Guthrie, Ph.D. (Ricardo is the Director and Associate Professor of Ethnic Studies at Northern Arizona University). 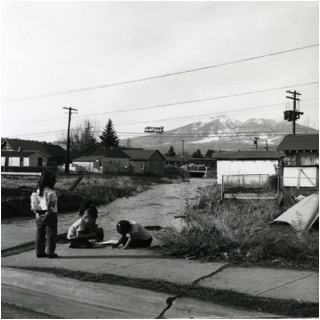 Due to the historic evolution of communities in Flagstaff, and the practice of segregating people of color in certain parts of town, the history of floodplain management and diversion takes on a racialized element with residents living in the Southside Neighborhood being disproportionately impacted by flooding and the economic, environmental, and health challenges that flooding poses for the community.

The diversion of flow from the Rio de Flag’s natural channel into a manmade, undersized channel led to the removal of natural stream meanders and the narrowing of riparian areas along the main Rio de Flag river channel. As a result, flooding has been concentrated to homes and businesses in the Southside.

Currently, many Southside residents are unable to obtain flood insurance due to their location in the Federal Emergency Mitigation Agency (FEMA) designated 100-year floodplain. This FEMA designation puts Southside residents at an economic disadvantage in the real estate market by limiting their property values and opportunities to sell their homes. The City of Flagstaff estimates that nearly 1,400 structures are prone to flooding during 100-year flood events, with the majority of these structures prone to periodic flooding during the monsoon season, June through September.

On top of the economic challenges residents face, significant downcutting (downward erosion in a river) resulting from the loss of natural meanders that slow flow and erosional processes has caused channel instability in the Rio de Flag leading to soil disturbance and invasion of nonnative weeds. Downcutting exacerbates flooding because soil builds up in the river bed and decreases the river’s capacity to move water through the Southside. Residents also face health risks as trash buildup and illegal dumping in the river create barriers to flow where the Rio de Flag and its tributaries flow through culverts and beneath roads. Water pollution from urban runoff similarly poses health risks to residents during periodic flood events that flood the neighborhood, often on a weekly basis during the monsoon season.

In a separate effort, the City of Flagstaff has partnered with the U.S. Army Corps of Engineers to alleviate flooding of areas of the Southside Neighborhood and downtown Flagstaff that are located in the FEMA 100-year floodplain (Fig. 2). 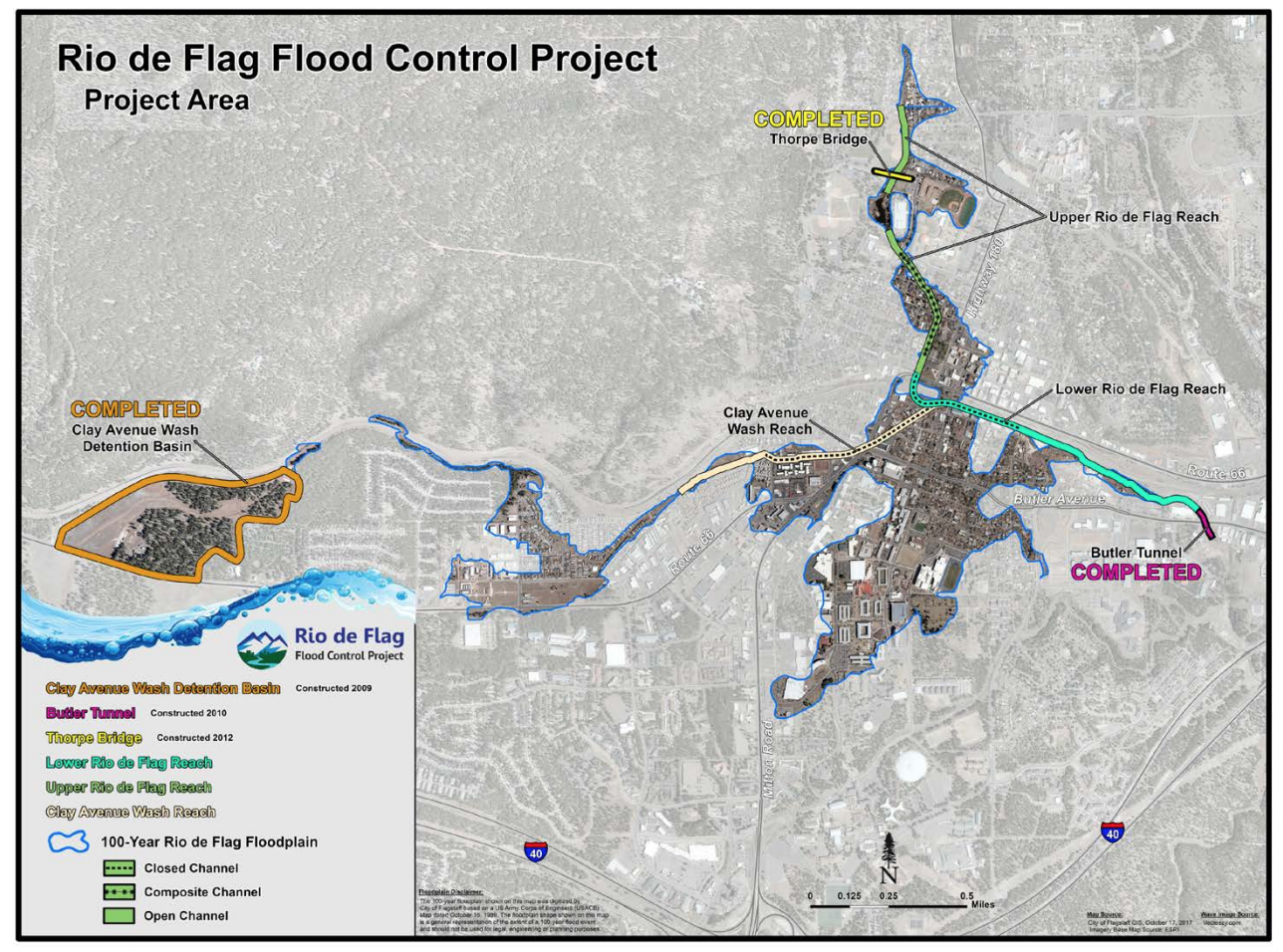 This project, known as the Rio de Flag Flood Control Project, would help to address the economic issues associated with the Rio in Southside by removing residents and businesses from the 100-year floodplain. The Army Corps project has a long history and is still in the planning process.

All U.S. Army Corps projects depend on the Benefit-Cost-Ratio (BCR) to be eligible for federal funding allocation. This ratio using a variety of metrics to determine the balance between the benefits of a project and its costs. In general, most Army Corps projects that receive federal funding have a BCR of 2.0 or even 3.0 if not greater. In other words, the benefits of the project outweigh the costs at a 2:1 or 3:1 ratio.

Currently, the Rio Project has a BCR of 0.85. Unless the City is able to reach a greater benefit-cost-ratio, the Rio Project will remain dead in the water without funding. The Flagstaff community must look towards local funding options in order to complete the Rio Project.

WHY IS FLOOD CONTROL URGENT FOR SOUTHSIDE? 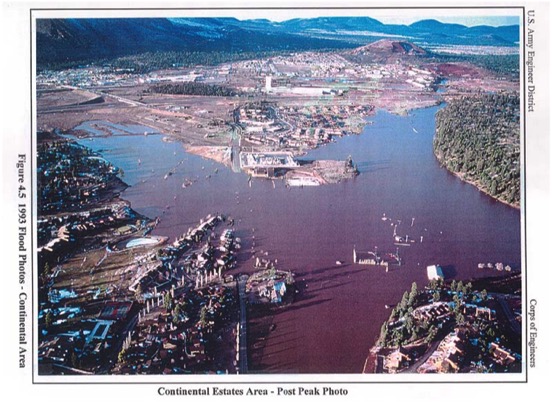 The City is currently completing an updated Southside Neighborhood Plan addressing such issues as affordability, parking, and flood control. The Rio de Flag in Southside is a catch-22 situation. The threat of flooding and the expensive of flood insurance must be dealt with, however, when the floodplain is removed there is the risk of increased change in the composition of the neighborhood. Please join us as we work towards understanding the specific implications of a flood control project and threats faced by the Southside residents.