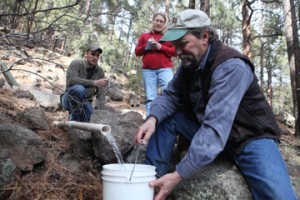 As patchy snow crunches under his boots and icy crystals sparkle in the early winter sun, Steve Monroe hikes to a small canyon on the southwestern side of the San Francisco Peaks.

This place of basalt boulders and towering pines looks like a lot of other frozen scenes in northern Arizona’s high country on a January day, except a closer look into concrete enclosures reveals movement.

Water — now released only through a system of valves and pipes.

Perched into the slope is Big Leroux Spring. Its perennial flow was once an important water source for American Indians, pioneers, wildlife and Flagstaff’s founders. Explorers coming through with thirsty mules and horses called it a fountain that bursts out of the side of the mountain. In 1851, Lieutenant Edward Beale described it as “transparent sparkling water” that “runs gurgling down for a quarter of a mile, where it loses itself in the valley.”

For the last decade, Monroe, a National Park Service hydro-ecologist, has been measuring the water flow and studying the history of the area. He says early visitors likely found the now endangered northern leopard frog here, probably salamanders, snails and dragonflies, too.

“Those species have been observed at other non-diverted or less-diverted springs in this region and it’s very probable that they existed at Big Leroux Spring because of the availability of water.”

MOST SPRINGS AT RISK

But things have changed in the last century and a half. The water has been diverted for people and livestock. The wetland, created by the spring, doesn’t exist anymore.

Northern Arizona University School of Earth Sciences and Environmental Sustainability hydrogeologist Abe Springer says the same thing has happened all over the West.

“More than a thousand springs and spring-fed wetlands support rich plant and animal life in northern Arizona, including rare species,” he said. “Unfortunately almost all of them have been declared ‘at risk’ by the Arizona Water Institute.”

“Settlers would have come upon many spring-fed wetlands, such as wet meadows, here in northern Arizona that hold onto the water and slowly release it downstream,” Allen said. “Today we often see deeply eroded stream channels that quickly whisk water away.”

Big Leroux Spring starts from snowmelt at higher elevations. The water is absorbed by porous volcanic rock. It finds its way down the mountain through tiny tunnels and cracks. Currently, the spring water is pumped to the Forest Service Hot Shot camp at the base of the Peaks. But firefighters aren’t there all year, and when they are, they’re only using a small percentage of that water.

Monroe says a modest flow for Big Leroux is 10 gallons per minute. That’s more than a garden hose at full blast.

“Many springs were plumbed decades ago to deliver drinking water to livestock, but this infrastructure is often dilapidated and can neither effectively provide water to livestock nor water for the riparian or wet meadow environments that springs would naturally support,” said Sharon Masek Lopez, a watershed restoration research specialist with the Ecological Restoration Institute.

In addition, millions of small-diameter trees choking Arizona’s forests because fire has been excluded for many years are absorbing water and drying out meadows that historically were spongy, muddy and wet.

“Trees use a greater amount of soil moisture than grasses and may be keeping springs from flowing,” said Springer.

Because springs are hotbeds for biodiversity, Springer and Masek Lopez are in search of sites like Big Leroux as candidates for restoration. Prioritizing these sites is a significant component of large forest health projects such as the Four Forest Restoration Initiative currently in the planning stages for 2.4 million acres across the Mogollon Rim.

So, working with the Grand Canyon Trust’s Spring Stewards and the Grand Canyon Wildlands Council, using findings from Monroe and others, looking at historic photographs and reading pioneer journals, these NAU researchers are assessing more than 200 springs on the Coconino and Kaibab National Forests.

“By engaging the public as volunteers in springs research and restoration we are building a community of educated people, which is critical to the survival of springs,” said Grand Canyon Trust Volunteer Program Manager Kate Watters.

Making the two-year collaborative spring study possible is a $146,000 grant from the Nina Mason Pulliam Charitable Trust. The goal is to identify at least 50 northern Arizona spring sites that can be rescued. Some restoration recommendations may involve a hybrid approach, where water is made available for livestock while reserving a protected area for wetland habitat.

During her lifetime, Nina Mason Pulliam dedicated her assets and business expertise to organizations helping people in need, and protecting animals and nature. Her legacy could one day include the return of natural pools, teeming with life, among the volcanic rocks at sites like Big Leroux.