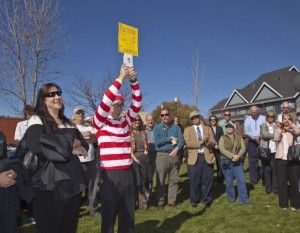 The city of Flagstaff’s plans to buy and preserve hundreds of acres at Picture Canyon came to fruition this morning when the State Land Department accepted the city’s $4.8 million bid at auction.

The city will use a $2.4 million grant from the Arizona State Parks Department and money remaining from a voter-approved 2004 open space bond to cover the purchase price.
City Councilmember Celia Barotz said the purchase of Picture Canyon for preservation has been a goal of hers for more than two years.

“This acquisition is a true testament to the vision and tenacity of the group of Flagstaff residents who years ago imagined that Picture Canyon could one day be permanently protected. I am thrilled that the City Council has authorized the use of 2004 open space bonds to complete this long-awaited purchase and will make this unique historical, cultural, archaeological, recreational and educational resource available for present and future generations to enjoy,” said Barotz. 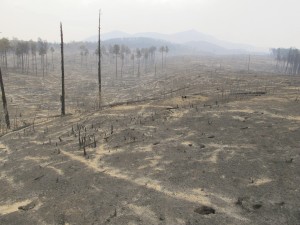 Park Williams is the lead author on a research paper, “Temperature as a potent driver of regional forest drought stress and tree mortality,” published September 30, 2012 inNature Climate Change. His co-authors are a who’s who of southwestern climate change scientists.

Based on an extensive analysis of tree ring data, Williams’ study reveals a bleak future for the forests of the Southwest. He concludes that the relatively steady increase in air surface temperatures that we are experiencing and will continue to experience will push our southwestern forests over the threshold of sustainability by about 2050.

“In the Southwest,” says Williams, “two main factors dictate where trees can and cannot live: the amount of water provided to trees via snow and rain, and the amount of water taken away from trees via evapotranspiration. As the Southwest warms, increasingly more water is removed via evapotranspiration, making less water available for use by forests.”

His talk in Flagstaff will address the following questions:

William DeBuys, author of A Great Aridness: Climate Change and the Future of the American Southwest, says of Williams’ work,”It is exciting to witness the release of the scientific equivalent of a best-seller. [His] work incorporates the kind of innovation and power than only come along once in a great while.”

Dr. Tom Sisk, Ecology Professor at NAU, says, “The science is strong and clearly presented. Its thoughtful consideration demands revision of our understanding of drought, as well as our approach to forest conservation…[T]ype conversion at landscape scales may be inevitable.”