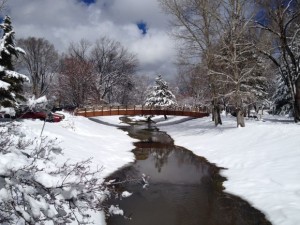 The Rio de Flag runs near the library during the snowstorm that hit Flagstaff recently. Photo by Shannon Clark.

The city of Flagstaff is hoping for another $500,000 from the federal government to complete the design of the Rio de Flag Flood Control project.

The project is designed to channel the water from a 100-year flood away from the city’s center. The city and the federal government have been working on the project since 2000. The original cost of the project was estimated at $24 million. It now has an estimated cost of $106 million. This year the city’s delegation to Washington asked for an additional $500,000 to complete the design of the project.

At Tuesday’s Council meeting, Copley said the trip was a great success. The delegation was able to meet with nearly all of the Congress members and federal staff members it needed to on the topic it wanted to discuss.

Vice Mayor Celia Barotz asked if there was any part of the trip that was disappointing.

Nabours said Rio de Flag project continues to be a source of frustration.

“It just seems like it’s just one issue after another. We just keep pushing it along. I think what we accomplished on that is to keep that project moving,” he said.

Copley said the delegation was able to meet with Sens. John McCain and Jeff Flake and Reps. Paul Gosar and Ann Kirkpatrick. All four congressional members agreed to support the project and reach out to the Army Corps of Engineers.

The delegation also met with representatives from the Energy, Science and Water Division of the Office of Management and Budget about possible funding to complete the design phase. The representatives from OMB also said they would contact the Corps of Engineers for more information on the project.

The deputy chief of the South Pacific Division of the Corps of Engineers recommended that the city contact the Corps’ assistant secretary as soon as possible about the funds.

Nabours told the rest of Council that it was important to keep the project at the forefront of the Corps and OMB’s attention. There are probably thousands of similar projects across the nation that are competing for the same pool of money. If the city doesn’t keep on top of the federal government, the project will never be completed.

Nabours also said that the delegation received some good news on another part of the Rio de Flag project concerning the purchase of property from the railroad. Federal laws states that land that was given to the railroad by the federal government must be returned to the government if the railroad no longer has a use for it.

Nabours said the delegation found out that a similar situation has come up before and there is federal precedent for selling federal land owned by the railroad to another entity. It will however, take an act of Congress in order for the sale to go through.

Nabours said he wasn’t too worried about the city getting approval for the sale of the property because the issue is usually not contentious and it had the support of Reps. Gosar and Raul Grijalva and Sen. Flake.

The delegation also met with the Arizona members of Congress, the U.S. Department of Agriculture and the U.S. Forest Service on forest health, Copley and Nabours said.

Sens. McCain and Flake have proposed a wildfire protection bill that would focus on preventing wildfires and less on mitigation during and after fires.

According to Copley’s report to Council, the delegation expressed the city’s frustration with how slowly the work with Good Earth and Campbell Group on the Four Forest Initiative was going. They also asked for further funding for federal staff in the Flagstaff area to continue the work on the Flagstaff Watershed Protection Project and environmental impact statement and record of decision on the project.

The delegation also planted the seeds of interest in federal help with widening the Fourth Street bridge over Interstate 40 and the Lone Tree Road I-40 interchange, Nabours said.

It also found support for a veterans home in Flagstaff from its congressional members.