From Ditch to Greenbelt: reclamation of the Rio de Flag in Cheshire

Meet at the NW section of the Museum of Northern Arizona’s parking lot. 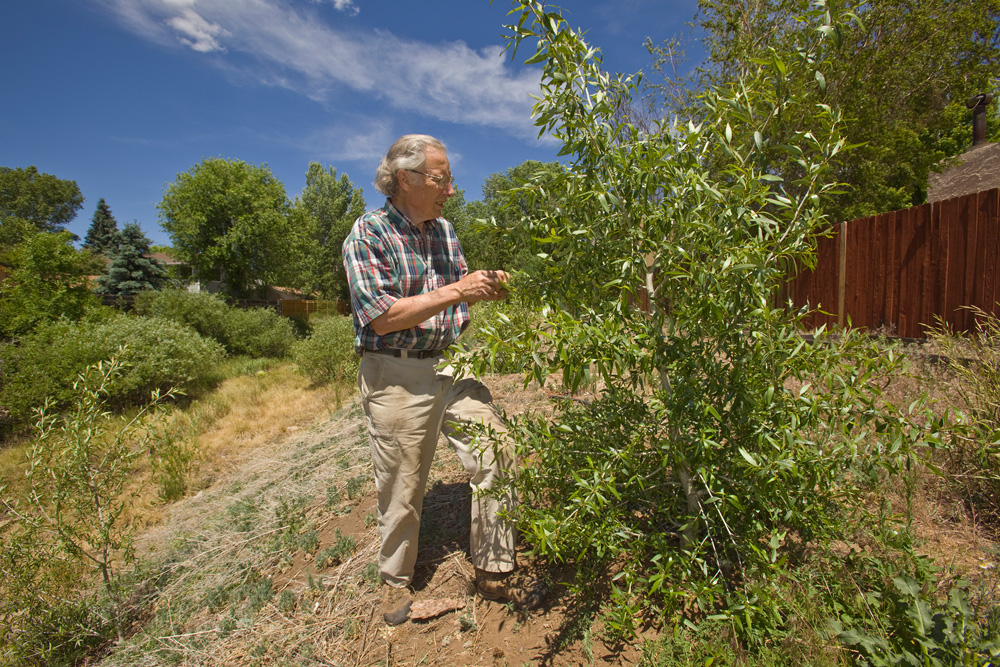 Ephemeral rivers only flow during large storm events such as summer monsoons. As such, these dry corridors are often perceived as and even treated as nothing more than ditches.

On Thursday, August 2nd we will discover how Regents’ Professor Emeritus Peter Price transformed the “ditch” behind his house into a flourishing riparian greenbelt. Dr. Price’s teachings at Northern Arizona University focused on insect ecology, entomology, and biological evolution.

Dr. Price will guide us along the Rio de Flag in his neighborhood where he planted willows and other plant species. These plantings create a vibrant area and provide shade for visitors and habitat for wildlife.

The restoration of ephemeral rivers builds awareness and recognition of these places as assets rather than unsightly burdens.

We look forward to seeing you next Thursday for a relaxing hike. Meet at 5:30pm at the northwest corner of the Museum of Northern Arizona’s parking lot (3101 N Fort Valley Road).

We are suggesting a $5/participant donation for this guided hike.

***Thank you to the Museum of Northern Arizona for providing parking for this event! Thirsty Thursday will take place at the museum following this hike (6-8pm). The cost is $6/person or free entry for museum members***

Since when is too much water been an issue in Arizona? After torrential downpours a week ago caused street closures across Flagstaff and evacuations in Havasupai Falls, flooding has become a forefront issue in northern Arizona once again.

Flooding has been a problem in Flagstaff since its founding in 1888. A massive flood in 1903 sent the wooden boardwalks and bridges of the quickly growing downtown Flagstaff downstream and established a 2- to 3-foot-deep mote at the doorstep of the historic Weatherford Hotel.

In 1993, Flagstaff experienced another flood. This one was categorized as a 25-year flood or a flood with a 1 in 25 chance of occurring in any given year. The 1993 flood created Lake Continental and flooded large sections of Flagstaff.

The Federal Emergency Management Agency (FEMA) often uses 100-year floodplain maps to designate funding for disaster relief. A 100-year flood in Flagstaff’s downtown and Southside Neighborhood is predicted to cause $916 million in damages, not to mention threats to public safety, health, and even life.

The FEMA 100-year floodplain is significant for homeowners because: 1) a 100-year flood threatens property damage and human safety; 2) it restricts building capabilities and renovation projects, and 3) flood insurance premiums are costly and have risen exponentially over the past few decades.

The Flagstaff area experienced 100-year and 1,000-year floods on July 17 and 18 in some parts of town and the surrounding areas. Total costs from flood damage during these storms are yet to be determined.

The Rio de Flag’s narrow channel through the Southside neighborhood is not the original path taken by the river, but a human-made channel.

In the early 1900s, the Rio de Flag channel in the Southside was constructed to prevent flooding of (then) new, affluent Brannen Homes built just southeast of downtown.

Previously, the river flowed through downtown, along the railroad line, and down a much larger channel that is visible just east of Warner’s Nursery.

The human-made Rio channel was rerouted through the heart of the budding Southside community, home to many African-Americans and Latinx peoples who worked for the railroad or at the Lumberyards. Built too shallow and too narrow, the new channel created a flood risk for these residents.

Flooding in Southside became an issue of environmental justice when the Rio was rerouted through the neighborhood because Flagstaff was segregated at that time and the underserved, lower-income residents of the neighborhood became disproportionately prone to the risks of flooding.

This flood risk was recognized federally in 1983 when FEMA declared that much of the Southside and the North campus of Northern Arizona University sat in the 100-year floodplain.

Southside has been known historically for its racially diverse population, lively nightclubs and churches. However, flooding and other issues need to be addressed to enhance the quality of life for Southside residents.

What’s next for Southside?

Recently, city leadership has made updating the Southside Neighborhood Plan a priority. The goal of the plan is to assess and address current issues such as flooding, parking, and affordability and create a sustainable pathway forward for the neighborhood. Ultimately, the plan will be approved by City Council and adopted as policy.

Over the past few months, I worked with the city’s Community Development team to gain resident input for this plan. We went door-to-door to survey over 800 Southside residents and completed 129 surveys. Approximately 52 percent were renters, 24 percent homeowners and the other 24 percent were either landlords, had culture connections to Southside or worked in the neighborhood.

The majority of renters stated that flooding was not a major issue; however, for many homeowners, flooding was a top priority.

This community input will shape a neighborhood plan that represents the Southside’s vision for their neighborhood and addresses the most pressing issues for the residents.

Now is the time to bring the community together to address these changes.

EPA Outreach Coordinator Matt Muchna is with the Friends of the Rio de Flag. 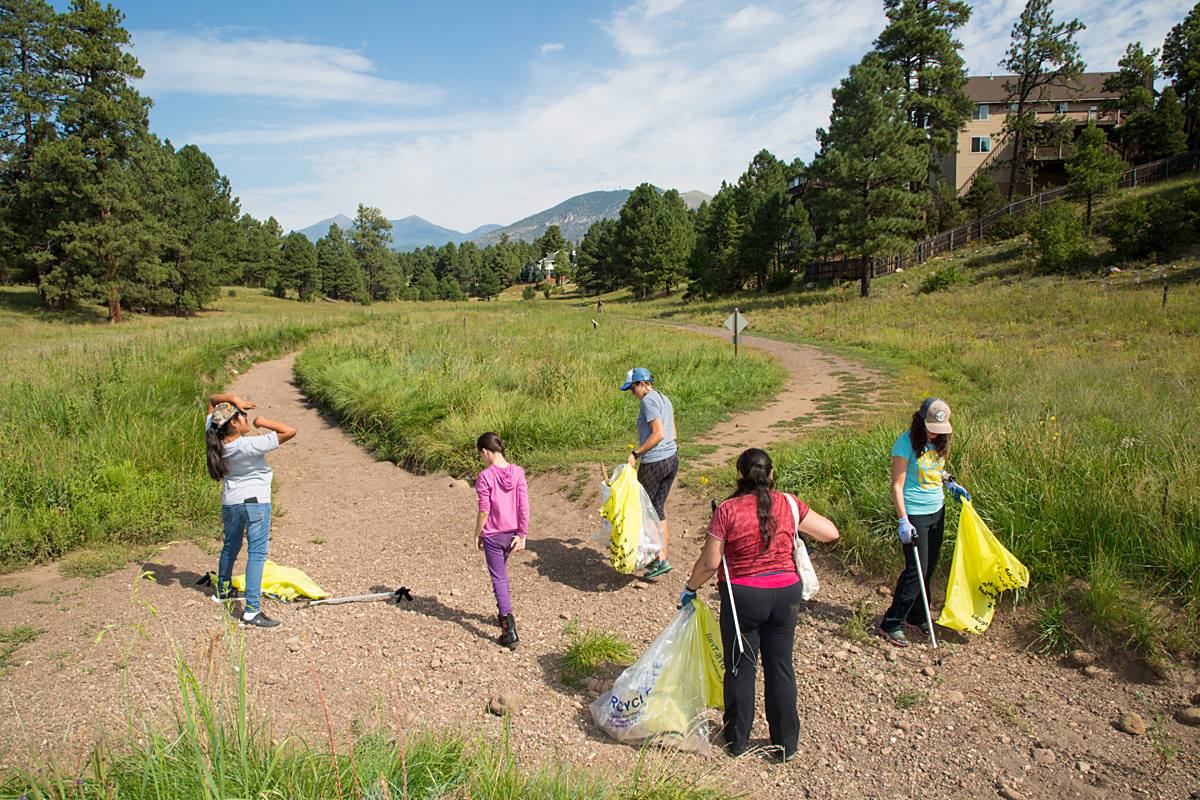 Recent floods have carried large amounts of trash and debris throughout the community. Join us to cleanup the Foxglen area which got covered in trash after last week’s storms.

Bring your own water bottle and coffee mug. Note: there is not a restroom on site for this cleanup. Please plan accordingly. 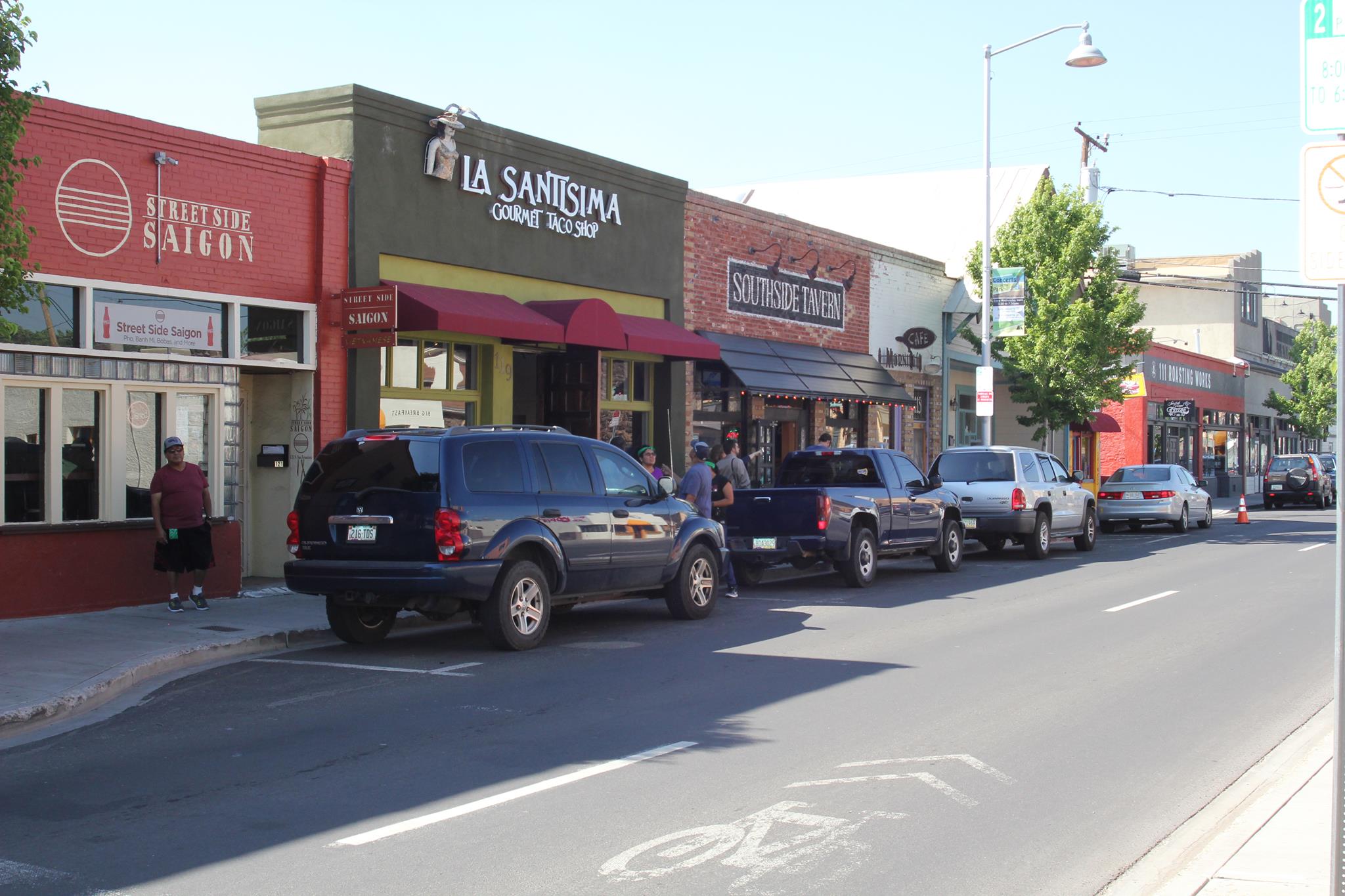 4:30pm to 6:30pm Neighborhood Tour (Please RSVP to Carlton Johnson at cjohnson@flagstaffaz.gov or call (928)213-2615 to save your spot)
6:30pm to 7:00pm Dinner and Presentation by staff
7:00pm to 8:30pm Break out Group Discussions about:
1. Street Design and Transportation
2. On and Off Street Parking
3. Future Transportation Scenarios – Lone Tree Extension to Route 66, Milton Road BNSF Bridge expansion, and expansion of the Downtown Transit Connection Center
4. Stormwater/Flooding Management and Facilities

Do you enjoy hiking? What about hiking followed by complimentary pints from our favorite local brewery? 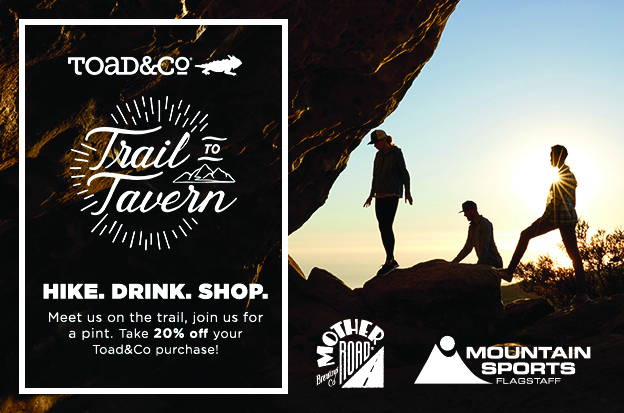 3 pm Hike
Meet at Mountain Sports Flagstaff at 3pm for a guided hike with Friends of the Rio de Flag. Join us for an informative walk along the Urban Trail with details on local ecology and history.

5pm Music, discounts and FREE beer
Following the hike, return to Mountain Sports
Enjoy music by Railery, FREE beer from Mother Road Beer and 20% off all Toad&Co purchases.
Friends of the Rio de Flag will also be in house sharing information about their organization and mission to protect, restore, clean up and improve the Rio de Flag. 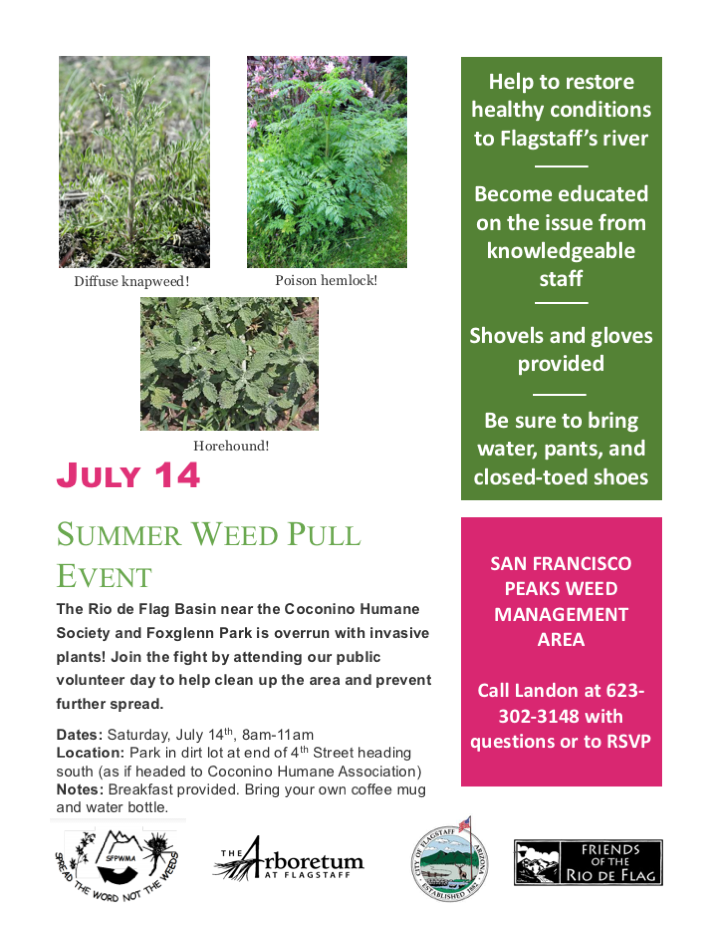