Last month we goofed up and forgot to post Jack’s February Walk the Walk series! Our sincere apologies to anyone who missed out! If you are interested in receiving notices directly from Jack, you can always email him at ADILLLO@aol.com. Please see this schedule (updated 3/13/2017) for Jack’s March walks. 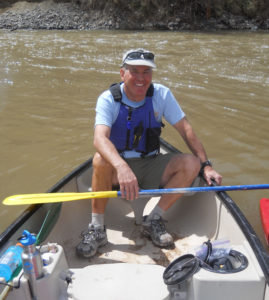 Water-based recreation activities comprise an important source of revenue and enjoyment for visitors and residents alike in Northern Arizona. However, development and groundwater pumping projects threaten recreation along many waterways in this part of the state.

Join us on Thursday, March 2nd for a discussion of these issues related to the Verde River and Fossil Creek. We will hear from Dr. Charles Hammersley, Professor in the NAU Parks and Recreation Management Program, who has lived in Flagstaff for the past 20 years and has served as the first Chairman of the Coconino County Parks and Recreation Commission and was a member for 12 years. He has also served as Chair and member of the Flagstaff Parks and Recreation Commission for seven years. He was a member of the 2003 Coconino County Comprehensive Planning Commission and he also created, organized and directed the Verde River Canoe Challenge from 1999 to 2012.

We hope you can join us for Dr. Hammersley’s presentation this Thursday!

Could we really lose our treasured national forests and public lands?

The short answer is maybe. It will depend upon how much the tens of millions of people who love and use these lands are willing to become involved to save them.

If you enjoy camping, hunting, fishing, skiing, mountain biking, snowmobiling, taking an OHV ride, horseback riding, bird watching, rafting, mountain climbing, and many other outdoor recreation activities without having to face a No Trespassing sign, then you should get involved in efforts to save them.

Very few of you enjoy these activities on private land. You go to the wonderful public lands that every American owns. If you do not oppose the efforts to dispose of our public lands, there certainly is a chance it could happen. It will not happen through the court system, despite the wishes of those who want to keep trying in the face of decades of settled law. But it could happen if Congress changes its mind and decides we don’t need them any more. One bill passed by Congress and signed by the president could do it.

I think President Theodore Roosevelt was right. Our public lands belong to all Americans and should be managed under federal protection. Roosevelt acted to save America’s diminishing natural resources and brought 230 million acres of public land under increased protection as national forests, refuges, parks, and monuments. These public lands are the envy of the world and managed using scientific principles that have become the bedrock of public land management policy. Go in any direction here in Utah and enjoy the fruits of those wise decisions we have enjoyed for well over 100 years.

Make no mistake about it — the next state budget crisis or $100 million fire suppression bill will bring calls to raise money from a land sale. And there goes your heritage, along with your favorite mountain or lake. Worse yet, for many of you who work in the incredibly large outdoor recreation industry that depends on these lands being available for average Americans, there goes your job.

You might have heard of the recent sale of 172,000 acres of Boise Cascade timberland north of Boise, Idaho. The billionaire Wilks brothers from Texas bought it and immediately closed it to hunting and other recreation. They cancelled leases with Valley County to maintain roads that provided access to snowmobile trails on public land. All of this is their prerogative, of course, because it is now their land. But think for a moment how you would feel if this happened to the Uinta Wasatch Cache National Forest you see from your front door.

The folks who want to transfer our public lands to state or private ownership won an early victory in the new Congress. On the first day of its new session, the House passed a new rule designed to make it easier to transfer lands to states, local communities, or Indian tribes by assuming these transfers would not cost the federal government anything. Not a single dollar. This eliminates one budgetary barrier to land transfer bills.

So what to do? We in the National Association of Forest Service Retirees believe the answer is to get involved in whatever way you can. If you are an elk hunter, join the Rocky Mountain Elk Foundation. If you snowmobile, join your local snowmobile association. If you enjoy watching birds, join the National Audubon Society. There is an organization for every outdoor pursuit. Then you can work together with friends and make a difference.

And above all, as an individual, contact all your legislators, go to their town hall meetings, and let them know what you think.

I think the saddest question I might hear someday will come from a child who asks his or her grandparents this question: What was it like when you could just go to the mountains?

Jack Troyer retired as an Intermountain regional forester after a 39-year career with the U.S. Forest Service. He serves as a board member of the National Association of Forest Service Retirees and lives in Ogden.