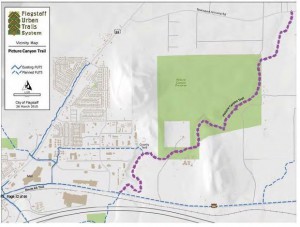 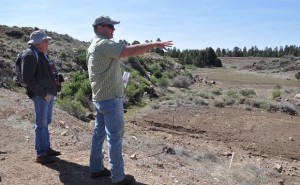 David McKee with the city of Flagstaff’s stormwater management department stands above the Rio de Flag waterway. The city of Flagstaff is in the midst of a project to restore the river’s historic watershed. Photo by Emery Cowan © AZ Daily Sun.

After it winds through Flagstaff, squeezing between homes, under roads and through culverts, the Rio de Flag ends up on the eastern edge of the city.

Here, the industrial uses that have been pushed to the city’s edge run up against, and tumble into, a rare ribbon of riparian habitat.

“A lot of this area was taken for granted as a trash dump for a long number of years,” said Andy Bertelsen, the county’s director of public works.

This is also the place where the city of Flagstaff has spent the better part of the past decade restoring the Rio de Flag’s path, step by step. The final vision is to extend the Flagstaff Urban Trail System for 3.3 miles along the newly restored riparian area. The trail would connect Doney Park to the existing FUTS trail near the Flagstaff Mall and wind through Picture Canyon Natural and Cultural Preserve. (read more…)