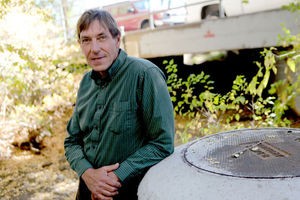 Malcolm Alter, the stormwater engineer for the city of Flagstaff, stands in front of one of the undersized culverts along the Rio de Flag that a new watershed flood model is likely to identify as in need of enlarging. (Jake Bacon/Arizona Daily Sun)

Malcolm Alter stood on Cherry Avenue as it crosses over the Rio de Flag and held his hand up to his waist. That was how high water would reach above the culvert in the event of a 100-year flood.

City stormwater officials generally know how Flagstaff would be affected if a massive, 100-year flood spilled into the watershed that drains into the city’s heart. But flooding impacts under other scenarios — if a massive wildfire roared through the area or if drainage-altering development occurred upstream of town — are hypotheticals the city has a hard time answering.

It’s a problem they’re hoping to solve thanks to a $200,000 grant from the Federal Emergency Management Agency. The city will use the money to develop a set of hydrologic models that will allow it to predict what would happen to the Rio de Flag watershed under a range of scenarios.

That type of information will allow the city to do a better job of prioritizing stormwater infrastructure projects to minimize the risk of flood-related damage as well as find solutions to drainage problems that already exist.

Time for an update

Currently the city’s only watershed model is the standard FEMA flood insurance rate map. The more than 30-year-old document only discusses the potential impacts of a 100-year flood, which has a 1 percent chance of occurring in any given year.

“It isn’t worth much of anything,” said Malcolm Alter, the city of Flagstaff’s stormwater manager. “Nobody even knows where it is.”

FEMA has long focused on creating and updating the floodplain maps used for flood insurance policies. Over the last five years, though, the federal agency has turned its focus to help communities recognize and make better decisions about flood risk, said Bob Bezek a mitigation engineer with FEMA.

Flagstaff’s new modeling program will allow the city to better predict and prepare for the impacts of wildfire on the watershed, for example, which is something many places have failed to do, Bezek said.

Most communities’ efforts related to wildfires are usually very reactionary, which tends to also mean they are very expensive.

“With a study like Flagstaff’s maybe they can get ahead of those things,” Bezek said.

Flagstaff’s model will have the capabilities to show how the water would flow through the city’s manmade and natural drainages in rarer high-volume flood events, but also during the lower volume floods that are more likely to affect the area. The model will allow city engineers to pinpoint the potential bottlenecks — culverts that convey less water, and would be more prone to spilling over, than others upstream and downstream. With limited resources, the city will get the most bang for its buck if it can identify and focus on these drastically undersized culverts, Alter said.

The city will also put a major focus on modeling how water will drain from areas of the forest that will be treated under projects like the Four Forests Restoration Initiative. Those conclusions could help make an argument for future forest-thinning efforts as well, Alter said.

Finding solutions for persistent problems like water pooling on the east side of town that locals call Lake Continental and a sinkhole known as the Bottomless Pit are on the city’s to-do list as well.

On a broader scale, the project will help the city model how watershed flooding will be affected by weather events like severe storms that are expected to become more common with climate change.

The Rio de Flag watershed doesn’t end at the city limits, though, so the city’s modeling program won’t end there. either. Coconino County is involved in the project, as is Northern Arizona University. Students will be able to contribute data, such as soil mapping, to the model and then use it for various projects, said Charlie Schlinger, an associate professor of civil engineering at NAU.

If local entities like the U.S. Geological Survey and the U.S. Forest Service can also put information into the model, it can become state of the art, Alter said.

Flagstaff has already showed a commitment to improving the watershed. The city has adopted ordinances that incorporate green development principles that emphasize the use of natural drainage systems like plants and landscaping.

Kyle Brown, a stormwater project manager with the city, spearheaded a volunteer project on Saturday to landscape a corner of city property on West Coconino Avenue. Cuts in the curb will divert water that flows down the street gutter into a rock-covered channel. That water will be used to irrigate native plants and trees the volunteers also planted. The result is a project that puts stormwater to good use and mitigates flooding farther down the street.

“It sees the value of ecosystem services that a natural system provides and encourages those to be thought of again,” Brown said. “We’re basically trying to bring back the natural systems of the watershed.”