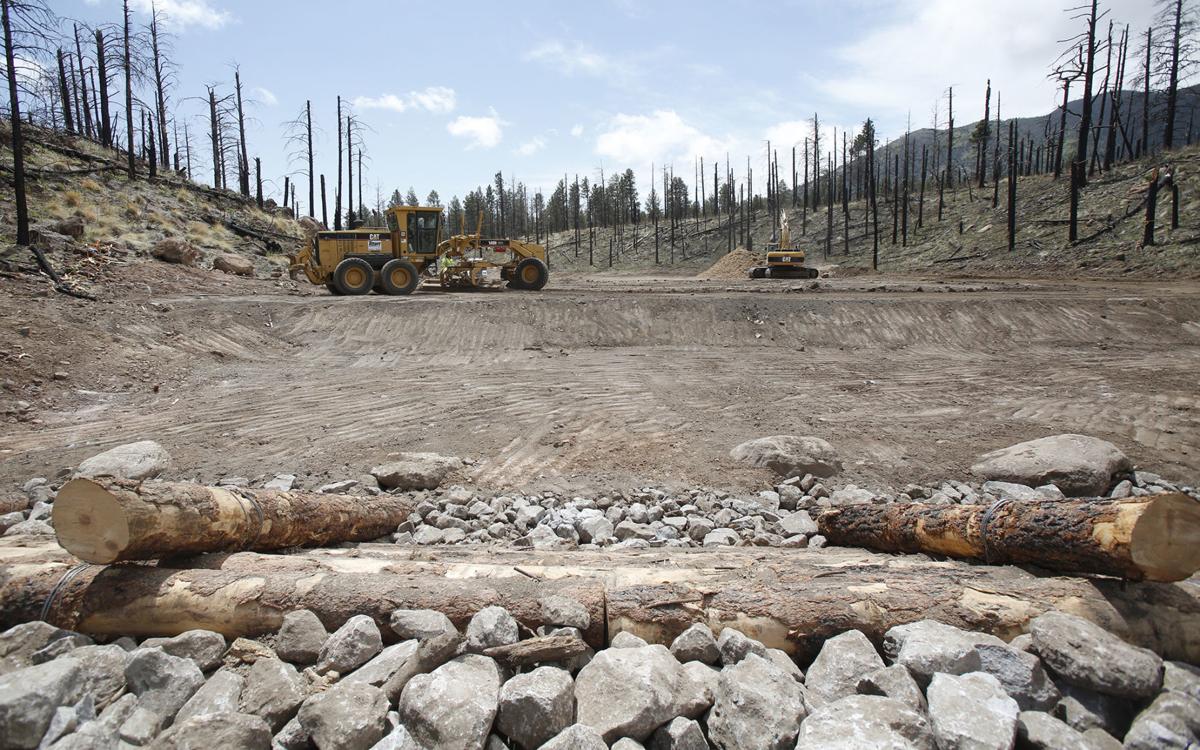 Large trenches filled with logs and small boulders help to collect sediment and slow down water as it rushes down the slopes burned by the 2010 Schultz Fire. About one third of the flood mitigation work was funded by Coconino County’s Flood Control District. Taylor Mahoney/ Arizona Daily Sun

City of Flagstaff residents could see a new addition to their property tax bills as early as this fall, and it won’t be something they or their city council voted for.

The Coconino County Board of Supervisors will vote Tuesday on a resolution to reverse a longtime interpretation of county ordinance that exempted citizens of Flagstaff, Page and Fredonia from taxation by the county’s flood control district.

What that means is when property tax bills go out in October, the owner of a $300,000 home in Flagstaff could find an additional $55 line item on their property taxes to pay for regional flood control projects.

The same goes for those who own homes, land and businesses in Page and Fredonia. 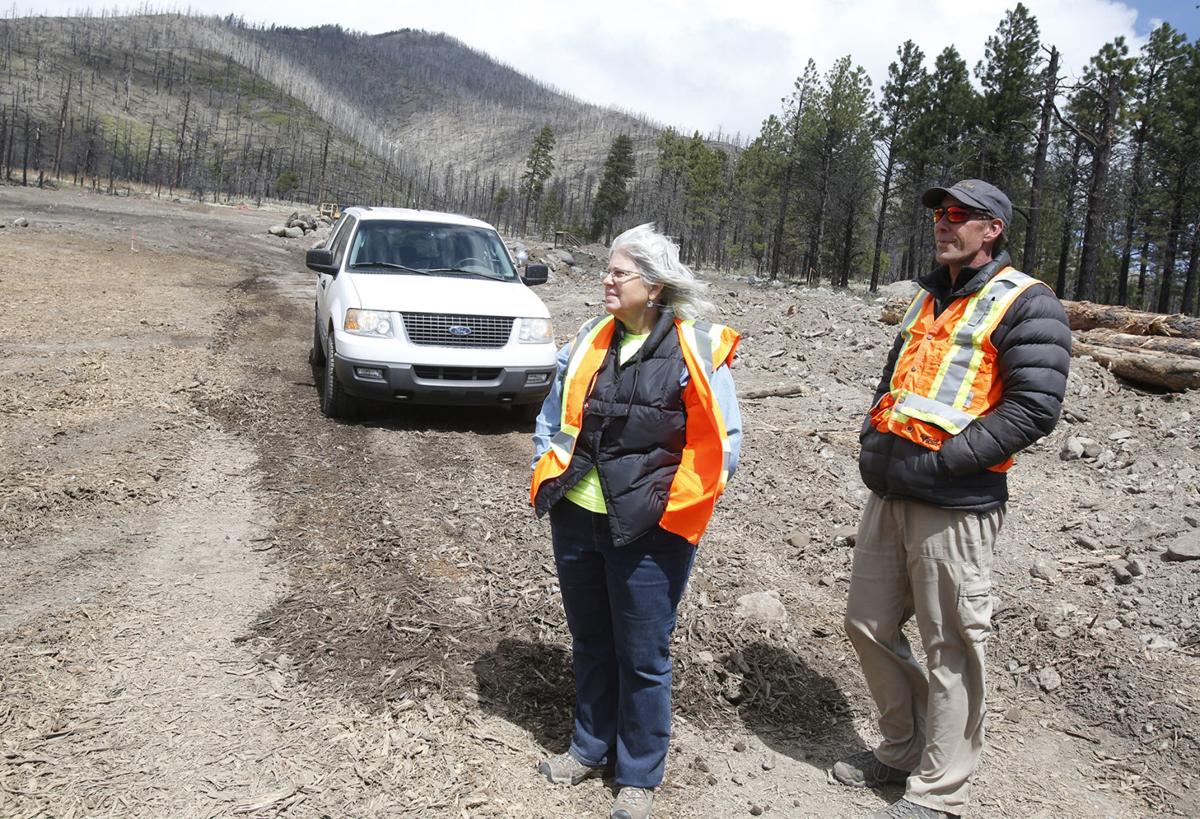 Coconino County Deputy Director of Public Works, Lucinda Andreani, left and James Guidotti, Coconino County capital projects manager, stand at the foot of one of the county’s flood mitigation projects in the Schultz fire burn area. The county’s flood control district funded about one third of the flood mitigation projects with the rest of the funding coming mostly from federal sources. Taylor Mahoney/ Arizona Daily Sun

Property owners of those three municipalities have been included in the county’s flood control district but exempt from taxation since the mid-1980s, when the district was created. An interpretation of the ordinance that created the district determined that those municipalities, because they each decided manage their own floodplains, could remove themselves from the district for the purpose of taxation, said Lucinda Andreani, interim deputy county manager and director of the public works department, which oversees the district.

But new advice from legal counsel hired by the county is that the flood control district tax should be levied upon all residents of the county, even if they live in cities that have elected to manage their own floodplains and have the ability charge residents additional stormwater fees to do so.

In short, cities and towns don’t have the “opt out” option that the county thought they did, Andreani said. That new interpretation also aligns with a requirement in state law that counties uniformly tax private properties within a jurisdiction, she said.

While the change will mean higher taxes for some, county residents who were paying the flood control district tax will see their bill drop. Andreani explained that the board of supervisors, which acts as the Flood Control District Board of Directors, are unlikely to increase the district’s $2.2 million budget in the short term, so when that total amount is spread out among more taxpayers, each property owner will pay less.

Judging from assessed values in the county, tax revenues from Flagstaff property owners will make up more than half of the district’s total budget with the change, said Mike Townsend, deputy county manager.

Expanding the number of properties within the district’s tax base also significantly increases the total amount of money it can collect from property owners before hitting the state-mandated cap of 50 cents per $100 of assessed property value.

The board still has the option to take advantage of that expanded capacity and increase the flood control district’s budget for the upcoming fiscal year, which starts in July, Andreani said. But more likely is that the board will keep the budget the same for this year, spend several months talking with cities and towns about potential changes to the tax rate and what projects it could fund, then increase the flood control district’s budget if needed, she said.

In talking to the cities of Page and Flagstaff and the town of Fredonia, Andreani said they understand the legal dilemma the county faces but are concerned about raising taxes within their jurisdictions.

On the plus side, broadening the district’s tax base provides an opportunity to complete additional flood control projects, she said.

In an email statement, city of Flagstaff spokeswoman Jessica Drum said, “The City of Flagstaff was recently made aware of the County’s proposal related to the Flood Control District. We have raised a number of questions to help gauge the County’s plans for public involvement and the potential impacts on the city’s operations and programs and to property owners within the city’s jurisdictional limits.”

Because it is countywide, the district is charged with funding projects that have regional benefits, rather than city-specific impacts. Recently, that has included hiring a forest restoration director to help speed up large-scale forest thinning projects deemed crucial to preventing catastrophic wildfires and post-fire flooding in the region. District funds are also going toward a floodplain project for Mountain Dell, weed mitigation in the area of the Schultz Fire and the development of a pre-disaster plan for the city of Williams in the event of wildfire and post-fire flooding on Bill Williams Mountain, Andreani said.

In the aftermath of the flooding that followed the Schultz Fire in 2010, about $11.2 million of the $30.1 million spent on flood mitigation came from the county district.

In Flagstaff, taxpayers have spent about $15.5 million on flood mitigation for the Rio de Flag project. The Army Corps of Engineers, which will take on the largest financial burden for the project, has spent about $25.2 million so far of what is estimated to be a $106 million project. The remaining cost to the city is about $30 million.

While the county is “pretty confident” that its move to extend flood control district taxation countywide is legally correct, it’s also hoping that one of the municipalities takes the issue to court and asks for a final determination from a judge, Andreani said. That would provide legal clarification not only for Coconino County but also the state’s 14 other counties, all of which have flood control districts and a similar taxing scheme, she said.

The flood control district’s budget, which directly affects property owners’ tax rates, will go through a public hearing in June when the board of supervisors approves the final county budget.