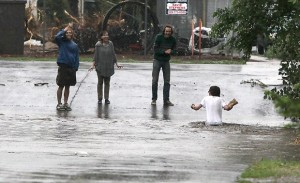 A group of people watches a man wade chest-deep through the Rio de Flag as a flash flood fills the drainage at the intersection of South Leroux Street and Phoenix Avenue. (Jake Bacon/Arizona Daily Sun/file photo)

There just aren’t any federal funds committed to the project on the near horizon, and that has some members frustrated.

“I think we need to have an honest conversation at this point,” Mayor Sara Presler said this week. “I feel like we’ve been on the wildest goose chase of our lives.”

Councilmember Art Babbott has floated the idea of city taxpayers partially financing the project up front while the city waits for reimbursement from the Army Corps of Engineers.

“It is not that we are saying to abandon our federal opportunities, we just need to reassess where we are,” Babbott said at a recent council meeting. “It is highly unlikely that we will be (federally) financed to a degree where there wouldn’t be a significant local contribution.”

Bob Holmes, the city’s federal lobbyist, blamed the recent funding drought on the refusal by Congress to seek earmarks for the project.

“With earmarks gone, we are essentially left without any funding,” Holmes said. “If we get (another) continuing resolution this year, we will not be getting funding because we are not in the president’s budget.”

On Tuesday, the council directed Holmes to continue to seek federal funding for the project, which would protect downtown Flagstaff and Southside in the event of a major flood and spur development.

City officials thought they had found some money for the project through stopgap funding measures passed by Congress known as continuing resolutions.

Those appropriations are tied to a fiscal cycle that had $3 million set aside for the project. But because the Senate did not authorize the funding for it, the project has not received any funding in the last two years.

Holmes told the council that he is still hoping to have the project included in President Barack Obama’s budget for the next fiscal year. But he concedes the current problem is tied the city’s over-reliance on earmarks.

“We are kind of a victim of our own success as far as the Rio de Flag is concerned,” Holmes told the council.

Holmes, who has represented the city for nearly a decade, explained the city has relied on appropriations requested by various members of the Arizona congressional delegation rather than going through a competitive process for federal funding.

Earmarks have fallen out of favor with both parties in the wake of public criticism of their lack of transparency and accountability.

To get the project into Obama’s budget, he explained, the Army Corps needs to essentially complete a cost-to-value assessment of the project known as a “chief’s report.” The report is fairly common with other Corps projects.

“The reason they never asked for a chief’s report is because they didn’t want to waste their money and because we were getting money from Congress every year in the form of earmarks,” Holmes said. “If we don’t get that done in short order we may not be eligible for funding until FY14.”

The congressman, he said, has urged the Corps to use discretionary funding within their control to complete the project “because it is nearly halfway done” and “it would sit fallow” without federal funding.

Presler, who did not attend last Tuesday’s council meeting, is more pessimistic about the likelihood of federal funding in the near term.

She has been meeting regularly with members of Congress and Corps officials to lobby for the flood control project since taking office in 2008.

Councilmember Coral Evans, who met with Corps officials Wednesday, left the dinner meeting with the belief that the federal agency is committed to getting the entire project fully funded and completed in a reasonable time frame.

“They are doing everything possible they can,” Evans said.

But that might not be enough for those hoping the decades-old flood control project will be completed in the next decade.

Babbott reaffirmed his commitment to continue to lobby for the project, but he left the door open to other possible funding measures.

Possibilities discussed include grants from state and federal agencies as well as local options, such as establishing a flood control district or getting voter approval to bond for the project.

With no federal funding for the Rio imminent, two options still exist for some minor construction projects related to the flood control project.

An unused earmark secured several years ago by former U.S. Rep. Rick Renzi and worth roughly $2.7 million could build a bridge near Thorpe Park related to the flood control project.

City officials are also still optimistic that $670,000 used by the Corps to investigate cracks in a detention basin that is part of the flood control project will eventually be made available for another capital project.

The city’s sole federal lobbyist tried to remain optimistic, despite the obstacles.